He was molested at Mountain View Catholic school

SNAP also says: “Hold off on starting a victims pay out plan”

Holding signs and childhood photos at a sidewalk news conference, advocate and attorney of victim will read statement written by clergy sex abuse victim who was sexually assaulted as a Mountain View student by a Catholic cleric who has been accused of abuse before.

--urge anyone who “saw, suspected or suffered” abuse to call the state attorney general, and

--beg “victims who are still suffering in shame and silence” to “speak up and start healing.”

And they will prod San Jose church officials to

--expand their official “accused” clergy list to include other categories of church staff, and

--hold off on creating any victims payout plan – as six California dioceses just have - until they’ve met with abuse survivors and until their support group meets with Ken Feinberg, the lawyer most bishops use when setting up such plans.

A Sacramento attorney/psychologist (who has represented hundreds of abuse victims) and a Missouri man who was molested by a priest and is the former long time director of SNAP, the Survivors Network of those Abused by Priests

1) A northern California man (identified only as John Doe) has just filed an official abuse report with the California attorney general’s office disclosing that he was sexually violated as a child in a Mountain View school. He has written a short statement about his experiences that will be read at the news conference.

The accused is Br. Donald W. Eagleson, who began his clerical career as a member of a Catholic religious order known as the Holy Cross Brothers but in 1985 became a Santa Rosa diocesan priest. In the 1990s, Eagleson worked at Sacred Heart parish in Eureka.

In 2002, he was suspended over abuse accusations from years earlier when he taught at Moreau High School in Hayward. He was sued for that abuse in 2004 and that civil case settled in 2005.

But church and school officials kept the allegations hidden from parishioners and the public until 2006.

Doe was sexually abused by Eagleson at St. Francis in or around 1958. He reported Eagleson’s sexual abuse to his father, who then reported the sexual abuse to school officials. The school evidently did nothing.

The victim and attorney will beg others who may have seen, suffered, or suspected child sex crimes and cover-ups in the San Jose area - at St. Francis or elsewhere, by Eagleson or others – to call the AG’s office and local law enforcement “so that others can be protected, so that the wounded can heal and so that the truth can be exposed.”

2) Last November, Attorney General Xavier Becerra announced that the Department of Justice is gathering information from the public regarding complaints of clergy childhood sexual abuse. Becerra’s announcement and investigation is a result of childhood sexual abuse survivors and advocates calling for a statewide grand jury investigation similar to the one in Pennsylvania released last year.

“This is a significant step for California and we suggest all survivors and advocates submit the online complaint form,” said attorney Joseph C. George, who is also a psychologist. The form is at https://oag.ca.gov/clergyabuse/complaint. Survivors and advocates can also send an email to ClergyAbuse@doj.ca.gov.

SNAP wants San Jose Bishop Oscar Cantu to move slowly before adopting any such plan. The group is highly skeptical of what it calls “top-down, church-run” programs that involve arbitrary deadlines, require victims to “sign away their legal rights,” forbid them from suing church officials, and keep child sex abuse and cover-up cases out of court, “where much more of the truth is expose about who has committed and who is concealing these horrors.” SNAP says these church programs are often designed more to protect the Catholic hierarchy than to help the abused.

But apparently, many (or even most) religious order clerics were omitted. SNAP also suspects that abusive nuns, monks, brothers, seminarians, bishops, teachers, and lay employees were omitted as well, especially those who sexually exploited or harassed or raped victims who were over the age of 18.

Eagleson is included in the updated list. According to the updated list, Eagleson sexually abused another minor in the 1960s, after John Doe’s father reported to school officials.

Still, SNAP is convinced that not all child molesting clerics who spent time in the San Jose area are on the Bishop’s list. The group is especially pleading with current and former church staff to “share what they know and suspect about abuse and cover-ups with law enforcement and groups like ours so that the vulnerable can be safeguarded, the wounded can be healed and the truth can be exposed.” 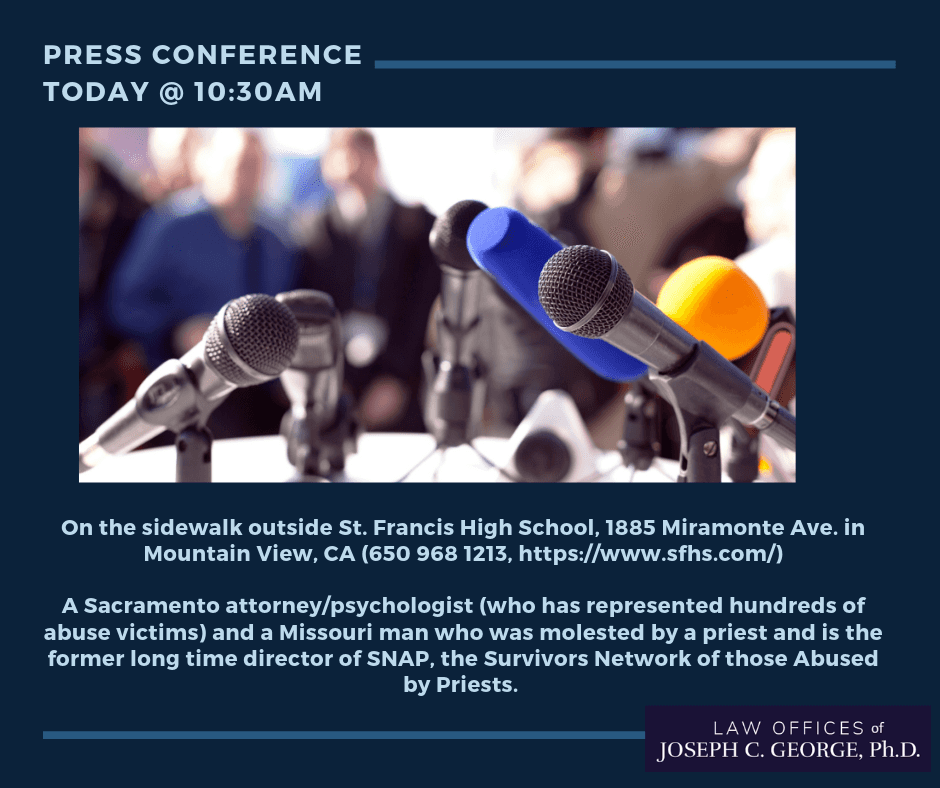